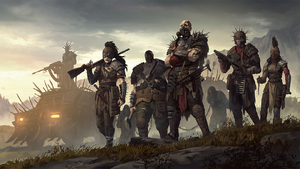 Bandits come in many shapes and sizes, but they are all ready to take from the weak and give to themselves. They are not interested in rebuilding societies. Instead, they live in strictly led factions concentrated on the idea of "survival of the fittest". They often inhabit previously abandoned locations, obstructing Specialists from scavenging them. Sometimes, a fortified Bandit Camp controls an entire sector and must be defeated before getting access to other locations in the sector. Bandits grow increasingly tougher as you move farther away from the colony. Attacking well-fortified locations is not advised without Specialists who excel in combat.

Attacking Bandits pits the Specialist's Attack, plus a pinch of luck, against the Bandits' Defense value. If the bandits survive the attack, they have their turn to attack, and it works the same way, but the other way around. More information about how Specialist's Attack value translates to damage points are found in the Specialist Skills chapter. In short, this means that an incompetent fighter can still prevail but has to risk several counter-attacks from the bandits to do so. The best strategy is to hit hard and fast so your opponent has no chance of retaliating.